Gate terminal has announced the ceremonial start of construction activities for the new LNG break bulk infrastructure in Rotterdam.

The Port of Rotterdam has started excavating a new harbour basin next to the Gate terminal. The new facility is expected to boost the use of LNG as a transportation fuel in the Netherlands and Northwest Europe.

Allard Castelein, CEO of the Port of Rotterdam Authority, added: “We are striving to make logistics more sustainable and promote the transition from fuel oil to LNG as fuel for shipping. Furthermore, we want to strengthen our position as the most important European LNG hub.”

The Port of Rotterdam Authority will build a new harbour basin and quay wall by the end of 2015. Gate will construct the LNG installations, including berthing and loading facilities dedicated to bunkerships and smaller tankers, enabling LNG bunker operations in the port of Rotterdam and further distribution of LNG in Northwest Europe. The new facilities are based on a multi-user service model, open to all interested parties, and will have a maximum capacity of 280 berthing slots per year. The finalisation of the construction, commissioning and first loading operations are planned towards the end of the first half of 2016.

The Port of Rotterdam Authority has already introduced new regulations that allow LNG bunkering for inland barges and ship-to-ship bunkering of seagoing vessels.

As the launching customer, Shell has committed to buy capacity from Gate terminal, which has enabled this investment in the terminal expansion. Shell has recently ordered a specialised LNG bunker vessel, to supply LNG-fuelled vessels in Northwest Europe. The new vessel will be based at the port of Rotterdam and will load from the new LNG break bulk infrastructure.

Dick Benschop, President Director of Shell Netherlands, said: “The new infrastructure will enable us to further improve our service to customers […] We expect LNG will form a bigger part of the transport fuel mix in the future.”

Read the article online at: https://www.lngindustry.com/small-scale-lng/30032015/lng-break-bulk-facility-under-construction-510/ 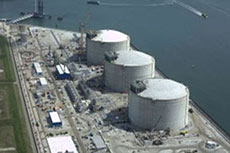 The Gate LNG terminal is adjusting its jetties in order to offer transhipment services in the second half of 2015. 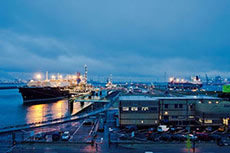 Gate terminal has signed a financing agreement with the EIB, in support of the expansion of LNG break bulk infrastructure.

The new facility in the port of Rotterdam is expected to boost the use of LNG as a transportation fuel in the Netherlands and Northwest Europe.