The LNG Hybrid Barge has been christened the HUMMEL (‘Bumblebee’) at Grasbrook Kai near the Hamburg Cruise Center in the Port of Hamburg. The godmother was Dr. Monika Griefahn, Chief Sustainability Officer for AIDA Cruises.

“The LNG Hybrid Barge will contribute towards making the air in Hamburg significantly cleaner,” said Dirk Lehmann and Henning Kuhlmann, both Managing Directors of Becker Marine Systems, in a joint speech. The two directors will also operate the barge.

Thanks to the use of the floating liquefied power plant, future cruise ships will be supplied with energy produced from eco-friendly LNG during their layovers at port. LNG lowers emissions and particulates, compared to marine diesel fuel. Sulfur oxides and soot particles are no longer emitted and the emission of nitrogen oxides and carbon dioxide will be reduced by 80% and 30% respectively. 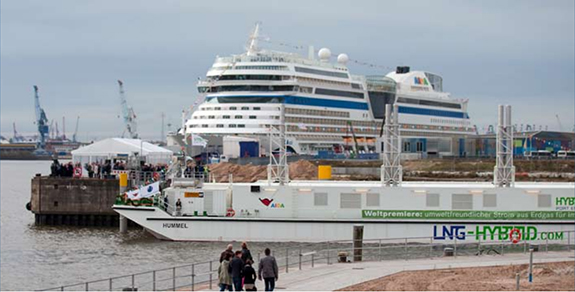 The LNG Hybrid Barge has been christened the HUMMEL at Grasbrook Kai in the Port of Hamburg.

As part of the christening, the first test connection was carried out with AIDA Cruises’ AIDAsol cruise ship. From the start of the next cruise season in spring 2015, the LNG Hybrid Barge is set to supply AIDAsol as the first cruise ship at its home in the Port of Hamburg.

Two years after the start of cooperation between Becker Marine Systems and AIDA Cruises in summer 2012, the LNG Hybrid Barge arrived in Hamburg on earlier this October. Previously, at just under 77 m in length and 11 m in width, the HUMMEL had made a three week trip from the shipyard in Slovakia travelling up the Danube, Main and Rhine rivers and the North Sea to the Elbe. Remaining work and testing of the first German seagoing vessel employing LNG technology then took place at Blohm + Voss.

Thanks to the LNG Hybrid Barge, Hamburg is to be the first port in the world in which external and low-emission power will be supplied to cruise ships.

Read the article online at: https://www.lngindustry.com/small-scale-lng/20102014/lng-hybrid-barge-christened-the-hummel-1621/ 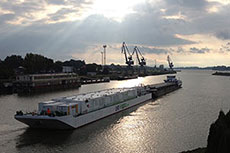 Becker Marine Systems is expecting the first LNG Hybrid Barge to arrive at the Port of Hamburg this weekend. 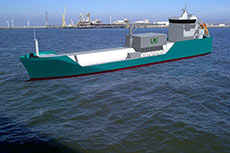 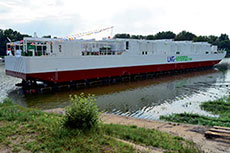 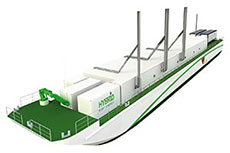