ENN has announced the opening of its first LNG fuelling station in the UK for heavy goods vehicles (HGVs). The LNG fuelling station is being used by Whitbread operating at Kuehne + Nagel’s depot in Wellingborough, Northamptonshire. It will refuel 16 dual-fuel HGVs for Whitbread commercial operations in the UK, such as Premier Inn and Costa Coffee.

This is the first station in Europe to deploy a 45 ft. ISO containerised ‘plug and play’ LNG refuelling station, over 200 of which already operate successfully in China. 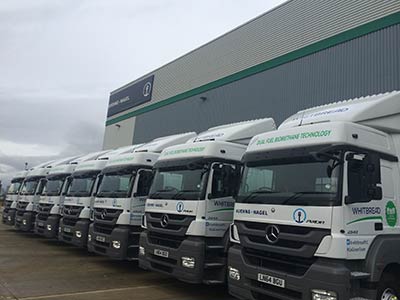 ENN’s containerised station includes 8 t of LNG storage, integral cryogenic pump and dispenser, and net metering and billing systems. The station design uses a modular approach: extra storage capacity can be added as and when required, as can additional dispensers and cryogenic pumps. The LNG fuelling sstation can also be expanded to enable refuelling with compressed natural gas (CNG).

Michael Liu, General Manager of ENN Europe, said: “ENN has ambitious plans to rapidly develop a network of natural gas refuelling stations in Northwest Europe, and will open several more stations in the UK, Belgium, [the] Netherlands and Germany in 2015 […] Our aim is to ultimately provide seamless LNG refuelling for companies like Kuehne + Nagel and Whitbread throughout the UK and the whole of Europe, and Wellingborough marks an important milestone on this journey.”

Read the article online at: https://www.lngindustry.com/small-scale-lng/12032015/enn-opens-lng-fuelling-station-404/