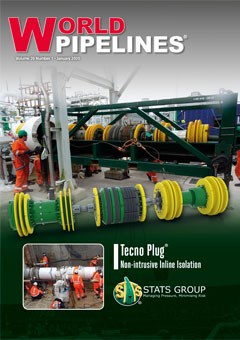 Soon after the doors opened into 2020, a new year and a new decade, the green light was given for construction of a new natural gas pipeline project: the EastMed. This pipeline intends to provide a direct export route to deliver gas to Europe from recent and to-be-found gas discoveries in the East Mediterranean area – namely the Levantine Basin.

Designed to transport 10 billion m3/y, the pipeline will extend 1300 km offshore and 600 km onshore, traversing underwater for longer than the Nord Stream pipeline, which runs for 1224 km through the Baltic Sea and is currently the world’s longest offshore pipeline.

Support from Europe for the EastMed pipeline project has been widespread, with talks of Europe’s gas supply becoming more secure as a result of route and source diversification, as well as development of EU indigenous resources. The project was confirmed as a Project of Common Interest in 2015, and was awarded with €2 million worth of grants through the European Union’s Connecting Europe Facility programme in the same year.

However, the backing by Europe for this natural gas pipeline now seems at odds with its heightened distaste for fossil fuels. Just back in November 2019, the European Investment Bank (EIB) announced it would no longer be financing any fossil fuel (oil, gas, coal) projects after 2021. This policy is radical in that the EIB will be the first multilateral lender to categorically stop funding projects that are likely to contribute to the world’s climate crisis.

Moreover, recently-elected President of the European Commission, Ursula von der Leyen, released a new Green Deal policy on 11 December which commits the EU to major emission reductions, with a target to cut emissions by 2030 by at least 50% (under the Paris Agreement the target is 40%). Further, the Commission plans to use investment of €100 billion to assist the EU economies divest from fossil fuels.

The advance toward greener pastures that was gaining momentum in the tail-end of 2019 must have greatly slowed, considering that the agreement for the EastMed pipeline’s construction was signed on 2 January 2020 by leaders from Cyprus, Greece and Israel. In fact, before the signing ceremony took place, Energean and DEPA (Public Gas Corporation of Greece) had already agreed on future co-operation for commercial operation of the pipeline. Energean and DEPA signed a Letter of Intent (LOI) for the potential sale and purchase of 2 billion m3/y of natural gas from Energean’s offshore fields. CEO of Energean, Mathios Rigas, stated that the EastMed pipeline “has not only the support of governments and the EU but is also attracting commercial interest from buyers and sellers of gas in the region” – evidenced by the fact the LOI covers a quantity of gas that is 20% of the EastMed pipeline’s initial capacity.

EastMed is estimated to cost in the region of US$7 billion and be completed around 2025. The pipeline developer – IGI Poseidon, a joint venture of DEPA and Edison – intends to fast track the development of the project, and plans to have made a final investment decision within two years. Turkey, however, is greatly unhappy with the project and the country’s exclusion. Turkish President Recep Tayyip Erdogan stated that his country must provide consent or the project cannot proceed; and with Turkey’s maritime boundary agreement with Libya, this could present a barrier to the pipeline’s route.

So, on the one hand, agreements are being signed, actions are being fast-tracked, and sales of gas reserves that are still deep in the field are being made. On the other hand, emissions targets are increasing in severity, funding terms for projects are becoming stricter, and political disagreements are arriving on the scene. With pen put to paper, the EastMed pipeline has every aspiration to come to fruition and help establish a Mediterranean gas hub.