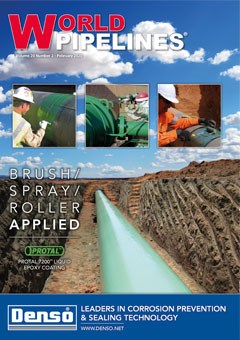 Pipelines generally run long distances, through varied, often remote environments, and transport barrels and barrels of valuable commodity. Rather than steal televisions, jewellery, money or computers, many a thief will dangerously tap into a pipeline network to siphon off vast quantities of crude oil, natural gas, or petroleum.

Unlike a speedy burglary, a pipeline tap can be stealing product for weeks or months, without being noticed. This illegal activity is occurring across the world, with detection, prevention, and even just acknowledgement of the problem, varying by the country. Several weeks ago, the President of Mexico, Andrés Manuel López Obrador (AMLO), was presented the results and future aims of the Joint Plan to Fight Fuel Theft, by Pemex CEO Octavio Romero. Following the plan’s introduction one year ago, the criminal act of fuel theft in Mexico has been reduced by 91%. My colleague’s editorial comment in our February 2019 issue paints a dramatically different picture to Mexico’s current situation. This time last year, AMLO had just taken up the presidency and a fuel pipeline had tragically exploded near Mexico City after it was illegally tapped, killing nearly 140 people. As one of his first acts as President, AMLO ordered the shutdown of multiple pipelines and sent troops to stand guard. His crackdown on fuel theft – a priority for his administration – has clearly made significant progress over the course of 2019, with 13 016 illegal fuel taps disabled and 8.3 million l of fuel recovered. The deployment of the army to guard the pipelines and Pemex’s facilities has also been reduced by 3300 people compared to January 2019, where 50 troops were positioned every 20 km of pipeline.

As part of the plan’s strategy, 175 km of pipeline is targeted to be covered with concrete matting as a layer of protection against potential theft. In addition, alarm systems will be placed along 1300 km of the pipeline network. Romero informed AMLO how current fuel theft averages 5000 bpd, but the goal for 2020 is to cut this value by 50%, to 2500 bpd. The concrete reinforcement, extensive alarm system, and planned ban on the sales of valves to tap the pipes, should all contribute to lowering this figure. Whilst Mexico appears to have created a winning strategy, over in Nigeria the criminal activity remains rife. The Nigerian National Petroleum Corporation (NNPC) has informed that 2181 points of pipeline vandalism had occurred between October 2018 and October 2019, and that “theft and vandalism have continued to destroy value and put NNPC at [a] disadvantaged competitive position”. Last week, several people were killed in Lagos state when one of NNPC’s oil pipelines exploded, with pipeline vandals the likely culprit. In comparison to Mexico’s fuel theft of 5000 bpd, Nigeria has seen an average loss of 138 400 bpd every day for the past decade.

It could be considered concerning that Nigeria is expected to contribute 35% of Africa’s total planned oil and gas new-build pipeline length additions between 2019 and 2023, considering the country is struggling to keep its current network free from vandalism, theft, and sabotage.1 With 11 pipelines planned for construction, hopefully preventive measures are implemented prior to the first product flowing through the pipelines.

Whether the substantial fuel theft reduction figures provided by Pemex have been inflated or not, it is evident that the plan to curtail illegal pipeline activity is a story of success. If 365 days of strategic measures can lower Mexico’s fuel theft by 91%, how will it look in another 365?