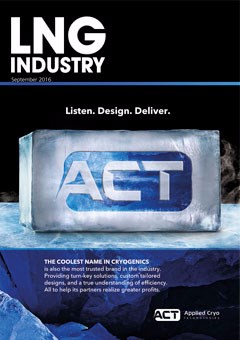 A recent report from the US Energy Information Administration (EIA) suggests that declining LNG imports in Japan and South Korea have been partially offset by increasing imports in other Asian countries.1 The EIA notes that LNG shipments into Asia’s two mature markets, as well as China, averaged 18.2 billion ft3/d in 2015, a 5% decline on the previous year. However, significant growth has been seen in emerging Asian LNG markets, with Pakistan, Thailand, Malaysia and Singapore importing a combined total of 7.36 million t last year, according to the International Group of LNG Importers (GIIGNL).2

Thailand is currently leading the way for the emerging Asian markets. The country doubled its LNG imports to 2.7 million t last year, driven by a surging demand for natural gas as its own natural resources decline. The CEO of Thailand’s national oil company, PTT, has confirmed that the country is ready to take advantage of the current LNG buyers’ market. In a recent interview with Bloomberg, Tevin Vongvanich revealed that he plans to sign long-term agreements with several LNG suppliers by the end of this year as the country aims to add approximately 3 million tpy of committed volumes.3 The company is increasing the capacity of its Map Ta Phut LNG Terminal to 10 million tpy this year, while plans are in place for this figure to eventually rise to 11.5 million tpy in 2019. A second receiving terminal has also been mooted.

Meanwhile, Pakistan was a significant entrant to the LNG market last year, with the opening of the Engro Elengy Terminal in Port Qasim, which is using Excelerate Energy’s Exquisite FSRU. Following on from the success of this terminal, BW Group recently announced that it has signed a 15-year agreement with Pakistan GasPort Ltd to provide regasification services utilising a new FSRU for a second terminal in the country, due to be delivered in 4Q16. The terminal will have a peak regasification capacity of 750 million ft3/d (more information about this project can be found on p. 8 of this issue).

Aside from the emerging Asian markets, LNG demand is expected to grow in China, India and Taiwan. In this month’s regional report, starting on p. 12, Douglas-Westwood (DW) predicts that US$38 billion will be spent on import facilities worldwide between 2017 and 2021 – a rise of 25% compared with the 2012 – 2016 period. Although Asia’s share of global expenditure on regasification facilities will fall from the whopping 92% recorded during the 2012 – 2016 period (on the back of surging demand in Japan and South Korea), DW still expects the continent to account for 66% of regas expenditure up to 2021, driven by China and India.

While we can expect a stormy ride in the near future as LNG oversupply threatens to persist beyond 2021, DW believes that LNG demand from other Asian countries will ensure a demand-supply balance in the long-term.