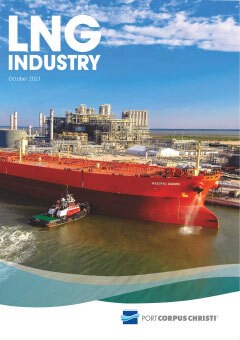 To describe the LNG industry as a picture of stability would be incorrect to say the least. It feels like just yesterday that my comment for this magazine outlined a record low for LNG spot prices, and now I am about to detail the record highs. In the space of 18 months, the LNG industry remains a rollercoaster ride for all involved in the sector – but I guess it keeps everyone on their toes.

In May 2020, the LNG market was oversupplied and demand was low, causing spot LNG to fall to a record low of US$1.85/million Btu. Ultimately this was the culmination of several factors, when COVID-19 containment measures destroyed demand just as new supplies from major producers flooded the market. The record low price of LNG allowed for new buyers to arrive on the scene, whilst exporters looked on with disdain.

Now jumping to October 2021 and the industry has been turned on its head. Competition for LNG is currently at a high, with Europe’s low inventory of the resource butting heads with the self-indulgence of the global top importer for LNG – China. Last week, an all-time high of Asian spot LNG prices was recorded at US$56.34/million Btu, according to S&P Global Platts’ JKM. Prices as high as this, in fact anything above US$20/million Btu, act as a major deterrent to price-sensitive buyers such as India, Pakistan, and Bangladesh. Back in May 2020, these buyers relished the low spot prices and imports flourished, however the current rally is not so welcomed.

At the opposite end of the scale is China, which is focusing on purchasing LNG irrespective of the cost. The country seems to have no budget because it is actively trying to prevent power outages and factory closures that could dampen its economic growth. Despite its efforts over the last year to stockpile fuel, it is still at risk of running out of coal and natural gas when heating demand jumps in the coming months when winter temperatures arrive. Those Asian nations with smaller pockets than China are coping with the global energy supply crunch by switching from natural gas to oil for power generation, according to Rystad Energy. This flexibility is enjoyed in Asia but not in Europe, since steeper carbon regulations are in place to limit European utilities burning oil in power plants.

Europe’s inability to fall back on oil in times of gas shortages is of concern particularly this year, as the continent is preparing to enter the winter with its lowest gas reserves in at least a decade. The UK is set to find times hard since it has some of the lowest gas storage capacity in Europe – having cut storage to 1.7% of annual demand – thus many fear the country is exposed to higher prices and the risk of shortages in the upcoming cold months. It is understandable that the UK has avoided investing in storage sites because its ultimate goal is to replace the majority of its reliance on fossil gas with cleaner alternatives in order to achieve net-zero emissions by 2050, however in the interim, gas power plants still need to be relied on as they produce near to 50% of the UK’s electricity.

In essence, a cold European winter combined with a cold Asian winter could spell disaster for Europe as there may be insufficient gas available to meet demand. With Asia confidently snapping up LNG, it leaves limited supplies for Europe to import. Does Europe really have enough gas to meet demand? We will have to wait and see.