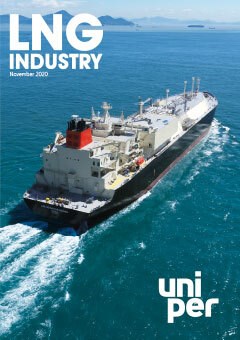 I am several weeks behind the initial hype, but I finally sat down to watch a documentary called A Life on Our Planet (available to watch on, without naming any names, a particularly popular streaming platform) hosted by David Attenborough. At 94 years old, this natural historian is a well-known and treasured Englishman, who has the ability to influence the masses in nothing but a positive way. The programme is essentially one hour and 23 minutes of hard-hitting home truths regarding the state of the planet, detailing the demise of our flora and fauna and the crucial changes we need to make. From the images of orangutans in Borneo without any habitat to never-ending scenes of coral bleaching, this is one of those programmes that makes you stop and think.

Control of our emissions into the atmosphere has been a hot topic for some years, and witnessing the progress made by the LNG industry in aiding the advances to decarbonisation deserves acknowledgement.

Recently, Total successfully delivered its first shipment of carbon neutral LNG to the Chinese National Offshore Oil Corporation (CNOOC). The shipment was from the Ichthys plant in Australia and delivered to the Dapeng terminal in China. In order to achieve this carbon neutral delivery and offset the shipment’s emissions in the value chain, two projects were financed to receive Verified Carbon Standards emissions certificates. One of said projects is the Kariba REDD+ Forest Protection Project, the goal of which is to protect the remaining forests in Zimbabwe and reinforce the biodiversity corridor by connecting the three national parks and eight safari reserves.

Having witnessed the destruction of forests on an alarming scale in A Life on Our Planet, Total’s project choice is unequivocally understood. This carbon neutral LNG shipment also acts as a reminder that just six months earlier, Total committed to becoming a net zero emission company for all of its European businesses by 2050.

The theme of decarbonisation continues through into this month’s issue, with Uniper (p. 14) addressing the importance of the LNG industry reducing its carbon emissions, not just supplying LNG at a competitive price. Also detailed is how LNG, as the cleanest fossil fuel, will be a principal fuel to bridge the departure of retiring oil and coal-fired power plants. With Attenborough stressing the need to phase out fossil fuels and look to other sources of energy, it is evident that LNG is ready and waiting to take centre stage, with companies and countries already taking action.

The US is one country which is onboard with the expansion of LNG, with the Trump administration extending the terms of seven long-term LNG export authorisations through to 2050. Thus far, the US has exported LNG to 38 countries across five continents, and US Secretary of Energy Dan Brouillette recently stated that during the course of Trump’s presidency, exports of US LNG have quadrupled, placing the US among the top three LNG exporters in the world. With the US Presidential Election just days away, regardless of the outcome, the US energy sector of 2021 will look rather different to 2020.

The documentary programme wrapped up with a rather bleak final warning for us all, essentially make a change or destroy the world forever. Instead, I leave you with a jam-packed issue of LNG technologies, developments, and a detailed report on the region we would all love to be on holiday in – Latin America and the Caribbean.