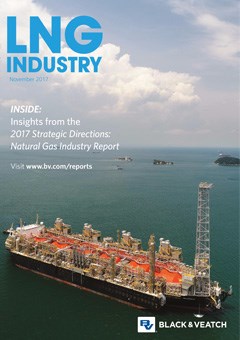 The South China Sea is an important trade route for LNG, and in 2016, almost 40% of global LNG trade, or approximately 4.7 trillion ft3, passed through.

The latest report by the US Energy Information Administration1 (EIA) details the critical role the South China Sea plays in LNG trade flows, namely, the importance of the trade route for Malaysia and Qatar.

Multiple other smaller LNG exporters also use South China Sea trade routes to reach their destinations. In 2016, Oman, Brunei, and the UAE shipped between 84% and 100% of their total LNG exports through the South China Sea. Much attention has been paid recently to LNG demand and supply dynamics and the impact of potentially lower demand growth on LNG prices. Could emerging markets such as these be key to the growth in demand that producers will be hoping to see in the coming years?

Based on projections in the International Energy Outlook 2017, EIA predicts that China will surpass South Korea as the world’s second-largest LNG importer by 2018 and go close to matching Japan’s level of LNG imports by 2040. If reports are to be believed, the country has recently been in talks with both Russia and the US to increase imports, as traders aim to grab a chunk of the lucrative, growing business of exporting gas to China.

In this month’s regional report on ‘emerging markets’, Arup explore emerging opportunities for LNG in Asia, with a focus on the increasing influence of China in the import market. A hot topic at the moment, new and emerging markets are offering hope to producers looking to contract their LNG in the coming years, under the shadow of a potentially oversupplied market. With China’s imports expected to continue to rise, and new players entering the market, the busy South China Sea is only going to get busier.

I hope you enjoy this issue of LNG Industry, and if you picked up a copy at the CWC World LNG Summit in Lisbon then don’t forget to visit www.lngindustry.com to subscribe and receive all the latest news from the global LNG industry.