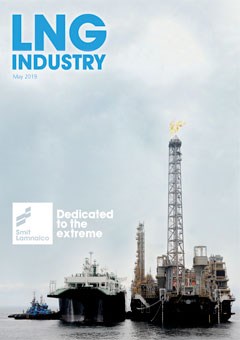 2019. The year of the final investment decision (FID). Indeed, as Wood Mackenzie noted in December last year, 2019 could be a record year for LNG project sanctions, with more than 220 million tpy of gas capacity aiming to reach FID.1

For now, however, it is the US Federal Energy Regulatory Commission (FERC) that is stealing the show. In April alone, the commission issued the Rio Grande LNG, Jacksonville LNG and Annova LNG projects with positive final environmental impact statements (FEIS); it authorised the construction of the Port Arthur LNG and Driftwood LNG projects; it prepared an environmental report for the proposed Gulf LNG project; and it allowed the Cameron LNG project to commence the introduction of pipeline feed gas. And that’s just April.

It’s fair to say then that 2019 is already shaping up to be a big year for the US LNG market, but it’s not just the US that is fighting to establish itself on the world stage. As this issue includes a regional report on Africa, I thought this would be a good time to discuss the enormous, but underachieving, continent.

As I’m sure you know, modern maps of the Earth are not entirely accurate. This is due to the fact that converting a globe into a flat map cannot be done without distorting it. One of the most noticable consequences of this is that Africa appears to be significantly smaller than it actually is. For instance, on a common world map, Greenland appears similar in size to Africa and yet it has an area of just 2.166 million km2. Africa, on the other hand, has a staggering area of 30.37 million km2.

Unsurprisingly then, Africa holds vast untapped reserves, but trying to monetise these reserves is proving to be more difficult.

As Gordon Cope, contributing editor, discusses in his article starting on page 14, “While the prospects for the LNG sector as a whole are looking up, proponents of projects in African nations still face a host of trials, from scarce resources and infrastructure, inept governments, finance barriers, growing domestic demand for natural gas, and widespread corruption. For those brave enough to face the challenges, however, the rewards are immense.”

For instance, Nigeria has nearly 200 trillion ft3 of conventional gas reserves. However, as Cope discusses, several of the country’s proposed projects have not materialised, with one of the main barriers being the fact that the country’s gas reserves are almost entirely associated with oil fields. As a result, they require thorough processing and infrastructure before LNG can be produced.

In addition to this, political barriers have also stopped African nations from realising their potential as LNG producers, as Cope discusses in his section on Mozambique.

One thing that remains undeniable is that Africa’s potential is immense. Indeed, Egypt is now an exporting country, and several major projects are now underway, including the Gimi floating LNG (FLNG) project, which is due to commence LNG production in 2022, and which has already entered into a 20-year lease and operate agreement (LOA) with BP for the charter of the vessel to service the Greater Tortue Ahmeyim project.

We hope you enjoy this latest issue of LNG Industry magazine. Please feel free to pick up a copy at Nor-Shipping in Oslo, Norway, and at the Canada Gas & LNG Exhibition and Conference in Vancouver, Canada.