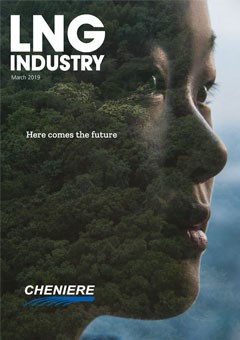 And so LNG 2019 has finally arrived. The triennial event now alternates between exporting and importing countries, landing in Shanghai, China, on 01 – 05 April for this year’s incarnation. China’s role in the global LNG market is constantly growing, and so the event could not land in the Far East at a better time.

As Peter Kiernan of the Economist Intelligence Unit (EIU) discusses in his article starting on p. 14, China has become an LNG consuming giant in a relatively short amount of time. In fact, despite the fact that the country only started importing LNG in 2006, Kiernan claims that it will also become the largest importer of LNG at some point in the next decade.

In addition to this, China is also expected to overtake Russia as the second largest consumer of gas overall in the 2030s.

Fittingly, the last incarnation of the event was held in Perth, Australia, which is China’s main supplier of LNG. With a number of projects coming online in the last few years, much of Australia’s LNG is now being directed towards China, not only Japan.

Although Japan has been the world’s number one importer of LNG for a number of years, nuclear restart operations following the Fukushima disaster in 2011 are now meaning that gas imports are forecast to be stable at best. China, meanwhile, continues to surge forwards.

It is not only a rapidly growing economy that is fuelling the requirement for increased gas imports, however. In fact, in an effort to decrease dependence on coal, the Chinese government is encouraging the increased use of gas. As Kiernan explains in his article, “China’s 13th Five Year Plan for Energy Development aims to increase the proportion of natural gas in the energy mix to 10% in 2020, rising to 15% by 2030 (currently, gas’ share is approximately 7%). For the power sector, China also aims to reach 100 GW of natural gas fired power capacity by 2020 (up from 67 GW in 2016).”

As I touched upon in my last comment, the shape of the LNG industry is undoubtedly undergoing some significant changes. The US and Canada are continuing to start up liquefaction and export facilities, and Australia is battling it out with Qatar for the top exporter title. China’s place in this conversation is crucial. After all, with a population of approximately 1.3 billion, an equally enormous amount of gas will be required to keep the economy moving smoothly, especially as dependence on coal is gradually reduced.

As with anything, there will undoubtedly be a number of challenges for China to overcome in the next few years as it seeks to increase its LNG imports, but it will certainly be interesting to see how it plays out. In the meantime, LNG 2019 will provide an excellent opportunity for industry professionals to make new connections, share ideas and attend talks, many of which will undoubtedly touch upon the role of China. We hope you enjoy this latest issue of LNG Industry magazine. Please feel free to stop by the LNG Industry stand at booth 3348 and meet the team.