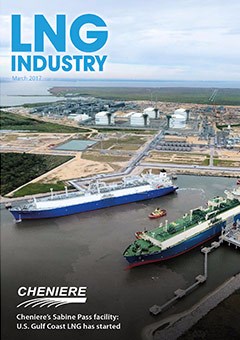 As the LNG industry readies itself for this year’s exhibition and conference in Tokyo, there is a real buzz being generated by the show. With over 25 000 attendees, 2500 conference delegates and over 600 exhibitors arriving from over 70 countries worldwide, the event promises new ideas, innovative solutions and the possibility of building profitable business connections.

As the eyes of the LNG world fall upon Tokyo, it is worth considering how the industry in Japan continues to develop, particularly as the country begins to restart their nuclear reactors.

If recent reports are to be believed, Japan’s LNG buyers are using their position of power as the world’s largest buyers of the fuel to earn concessions for more flexible terms. Japan’s electric utilities have won provisions that will allow them to divert contracted LNG cargoes in the eventuality that nuclear reactors are restarted. This could set a worrying precedent for LNG as more contracts start coming up for renewal.

Furthermore, the Japanese electric companies are pushing to gain allowances to resell imported cargoes and reduce their dependence on long-term contracts as Japan’s LNG demand dwindles. A shrinking population and greater use of alternative fuels has further contributed to this marked decrease in demand. Even as Asian spot LNG prices have dropped 65% from their 2014 peak, Japan’s electric utilities seemingly still want to restart their nuclear reactors since they are a lower-cost power generation source.1

This is not to say that LNG is being hurried out of the door in Japan. For many energy companies, LNG is still seen as a cornerstone fuel. Japanese gas consumption hit record levels in January. Tokyo Gas reported that usage in the capital city reached over 60 million m3. Japan has imported approximately 88 million tons of LNG over the last two years, and whilst it is true that this figure is expected to fall to 60 million tons by 2030, a growing number of Japanese companies are diversifying in order to ensure continued growth. As an example, Tokyo Gas is planning to expand its global presence in the fight against domestic demand troubles. As one of Japan’s largest LNG buyers, the company has announced a number of international projects, including an exchange agreement that will enable the energy provider to reduce shipping times and costs, and the signing of a memorandum of understanding with PT. Miura Indonesia to establish a strategy for industrial and commercial customers in Indonesia.

In the face of a changing energy picture in Japan, it is clear that LNG buyers will have to follow the lead of Tokyo Gas in switching their angle of attack.

Delving into the future of Japanese LNG more deeply, this issue of LNG Industry contains a regional report from Rystad Energy, focusing on the impact of nuclear restart operations on the LNG market. The outlook for Japanese LNG will no doubt be one of the main talking points of this year’s Gastech Conference and Exhibition. A preview of a selection of exhibiting companies can be found towards the back of this issue (p. 109). If you are in attendance in early April, please visit the LNG Industry team at stand 11-390 in Hall 4, where we look forward to meeting you!