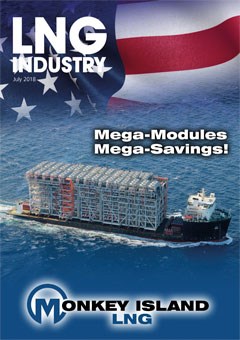 Last month’s World Gas Conference in Washington, D.C. brought together an estimated 12 000 attendees, including 600 speakers from over 40 countries from around the world.

I was one of those 12 000 attendees and really enjoyed my week in the capital. It was great to meet friends from the industry, put faces to names, and make new contacts. I divided my time between trawling the exhibition floor, manning our booth, and attending the various panel discussions, debates, and workshops.

Given that the US was playing host, it was natural that many of the discussions centred on the potential for US LNG exports. What is clear is that the potential is enormous, and the mood is therefore one of optimism and excitement. This was reflected in US Secretary of Energy Rick Perry’s opening remarks. In a speech full of positivity Perry said “we are sharing our energy with the world … and in so doing, we are empowering our friends, allies and trading partners economically and energy-wise.” His speech mirrored the eagerness of those companies involved in exporting LNG from US shores. “As I look to the future, I am truly excited about what it holds”, Perry stated.

This optimism has been clouded somewhat however by the continuing uncertainty over trade disputes between the US and China.

Patrick Pouyanné, CEO of Total, spoke to reporters at the World Gas Conference and warned that a trade war with China would be “very bad news” for exports of LNG.

LNG Ltd has announced that its talks with potential buyers in China have been placed on hold until the issue had been resolved.

The CEO of LNG Ltd, Greg Vesey, said: “We were in a meeting with a potential customer, who said they were not going to make a move until it has been clarified what is happening with these tariffs.”

The trade dispute has tempered enthusiasm and stalled plans to invest tens of billions and employ tens of thousands of workers in constructing a new wave of LNG export capacity in Texas and Louisiana. China has so far kept LNG off the list of US imports that are threatened with additional tariffs, even though other fuels such as oil and coal are included. Exporters of US LNG are worried that it could soon be targeted.

As many countries increase their imports of LNG, China remains by far the largest growth market, as the government seeks to curb the use of coal and clean its polluted skies. Last year China leapfrogged South Korea to become the world’s second-largest buyer of LNG, after Japan, with a 42% increase in imports. China alone accounted for 44% of the entire worldwide increase in LNG imports last year.

Whether or not this potentially damaging trade war intensifies is another thing. Positions may change, and the situation may de-escalate. Pouyanné is hopeful. “I hope that heads will cool down very quickly around the world among the leaders, so we can come back to a more stable world.”

In this month’s issue of LNG Industry, we are keeping up the intensity with features on FSRUs/FPSOs, terminal design, heat exchangers, transfer systems and more. Rystad Energy kick off this month’s helping with an investigation into the natural gas situation in Brazil, followed by a discussion on how Skangas’ strategic initiatives are providing ready access to LNG. I hope you enjoy this issue and if you have any questions or comment please do not hesitate to get in touch!