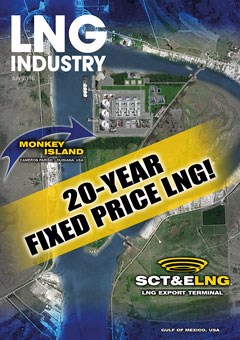 In early June, LNG Industry exhibited at the CWC World LNG & Gas Series 14th Americas Summit in Houston, Texas, alongside a number of familiar faces. However, some of you may be surprised to learn that representatives from NASA were exhibiting next to our stand. Researchers from Glenn Research Center (GRC) – one of ten major NASA centres, whose primary mission is to design, develop and test innovative technology for aeronautics and spaceflight – were on hand to discuss the current design and concept for a one-year exploration mission of Saturn’s largest moon, Titan.

Back in 2005, data from the Cassini-Huygens mission (a cooperative project of NASA, the European Space Agency and the Italian Space Agency) revealed that Titan resembles a frozen version of Earth, with seas of methane and ethane, which are replenished by rain from hydrocarbon clouds.

Now, NASA is preparing for arguably its most daring mission yet: to send a submarine to explore Kraken Mare, Titan’s largest northern sea. The plan is for the submarine to dive below the surface of the cryogenic sea to investigate oceanographic phenomena including the chemical composition of the liquid, surface and subsurface currents, as well as tides, wind and waves. The sub will also sample the silt that has been resting at the bottom of the sea for thousands of years. Ultimately, the mission may hold the answer as to whether extraterrestrial life exists in the galaxy. Scientists currently believe that some sort of liquid is essential for life. As the only other place in our solar system that is known to have liquids flowing across its surface, Titan is a prime candidate for such life.

The fact that Titan’s liquid methane seas are quite similar in composition to LNG found here on Earth means that the project represents a unique design and development opportunity for the LNG industry. As Dr Jason Hartwig, NASA GRC, explained in an email to LNG Industry: “All of the components on the sub must be LNG-rated; everything from simple valves and compressors, to the ballast system, shell and propellors.” He continues: “If the sub goes through standard tech maturation as any other vehicle or space hardware, there could be plenty of development work and opportunities for LNG companies to partner with us, run tests of their own, perform analysis, [become a] co-investigator on future proposals, help us with demonstration tests, etc.”

The project is still in its infancy and there are plenty of engineering challenges to overcome, including the fact that there is a little more nitrogen dissolved in Titan’s seas, due to the higher atmospheric pressure on the moon. This has led to concerns that the submarine’s radioactive-isotope power supply could warm the seas and cause the nitrogen to ‘fizz’, which may interfere with sonar measurements. However, there is still plenty of time for these concerns to be ironed out, with launch not expected until some time in the 2030s. Dr Hartwig added: “We went to the conference to basically introduce the sub and make the stakeholders aware of what is coming. Who knows, it could be LNG companies who end up building the submarine.”

In the meantime, there are plenty of extreme challenges currently facing the LNG industry back on planet Earth. This issue of LNG Industry includes a special new ‘Extreme’ feature starting on p.33, which puts the spotlight on some of the most challenging projects in our industry; from safe and reliable transportation of LNG through Arctic waters, through to burst detection systems in harsh operating environments and fire safety practices on floating LNG (FLNG) vessels.

If you have your own ‘Extreme’ story to tell, please get in touch. And if you’d like to learn more about NASA’s Titan Submarine project, visit: https://www.nasa.gov/content/titan-submarine-exploring-the-depths-of-kraken/#.V3E5nXquPTA