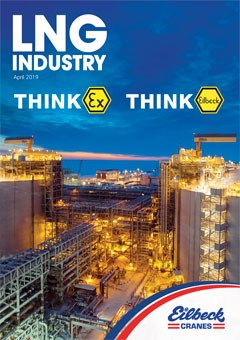 This latest issue of LNG Industry includes a regional report on Canada, so I thought I would talk about dinosaurs.

Let me explain. National Geographic very recently ran an article noting that the heaviest Tyrannosaurus Rex ever found was discovered at a fossil site in Canada.1 According to the article, it is estimated that the creature weighed approximately 19 500 lb in life. To give you an idea of just how big that is, it would take 110.5 of me glued together to make weight in the inter-epoch heavyweight championship of the world. I’ll take my chances.

Ancient Canada was also home to some other well-known beasts. The Ankylosaurus (the herbivore with a club-like tail) and the Elasmosaurus (a kind of plesiosaur that looked rather Loch Ness monster-like in appearance) were also found wandering across the continent. The latter reportedly swam near modern day British Columbia (B.C.), which has, it’s fair to say, come a long way over the last 80.5 million years.

Sometimes, however, it feels like the Canadian LNG industry could be moving at a slightly faster pace. As Thomas Liles of Rystad Energy discusses in his article starting on Page 12, industry sentiment in Canada is at a high right now, with LNG Canada’s positive financial investment decision (FID) representing potentially the largest private sector investment in the nation’s history. Regardless, Liles goes on to say that any additional large scale LNG sanctioning on the country’s west coast does not appear likely in the near-term, with the only other west coast project close to final sanctioning being the Woodfibre LNG project.

I will leave the specifics of why this is the case to Mr. Liles, but it is clearly important to remain realistic in our forecast of the Canadian LNG market, and not to get carried away with our expectations.

As with everything, these things take time. Indeed, the excavation of ‘Scotty’ (the name of the aforementioned heavyweight T. Rex) began in 1994, taking almost a decade to complete, and analysis is still continuing to this day. Interestingly, the latest discovery – that he was the heaviest T. Rex to have ever been unearthed – was recently made by analysing the size and width of his femur bone. The bone was 8 in. across, which, paleontologists claim, can be used to determine the overall weight of the creature.

Although Scotty was undeniably the king of his domain, it was by no means an easy ride. According to one New York Times article, our reptilian friend led a particularly tough life, with broken bones, impacted teeth and bite marks all found by paleontologists.2 Sadly, he passed away in his early 30s.

A few million years later, and the Canadian LNG market has a few battles of its own to win before it can establish itself as a true global player. Let’s hope that it can reach the top of the food chain, and not go the way of the dinosaurs.

We hope you enjoy this latest issue of LNG Industry. Please feel free to pick up a free copy at the 5th International LNG Congress in Malta, or at the Offshore Technology Conference in Houston, Texas.