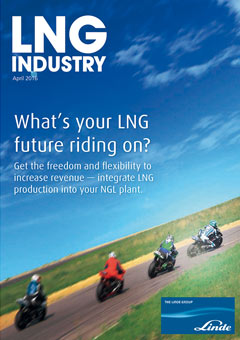 After more than six years of construction, the Chevron-led Gorgon LNG project in Western Australia finally shipped its first cargo of LNG to Japan in March 2016. According to the US Energy Information Administration (EIA), the first train from Gorgon has increased Australia’s LNG export capacity to 6.2 billion ft3/d.1 This figure is likely to rise to 11.5 billion ft3/d by 2019, once additional planned developments in the country have become fully operational.

Growing production in Australia has placed increased downward pressure on the Asian spot price. The latest ‘Seasonal Outlook’ from Thomson Reuters suggests that the northeast Asian spot price has fallen by almost 35% since the start of 2016, from US$6.90/million Btu to US$4.50/million Btu by late March.2 The authors of the report expect to see further convergence of Atlantic and Asian spot LNG prices during the summer months, which will make Europe an attractive destination for Atlantic producers, including those from the US. Thomson Reuters expects an additional 8 billion m3 of surplus LNG to arrive into both south and northwest Europe during the summer.

US LNG exporters would not have originally foreseen such a narrow difference between oil indexed and Henry Hub prices, which has resulted in Europe now emerging as a more attractive destination for US LNG. In this month’s regional report (starting on p. 12), The Economist Intelligence Unit (EIU) explains why the prolonged lower oil price environment has come at a bad time for US LNG exporters. The EIU believes that US LNG capacity currently scheduled to come online will not be fully utilised until global prices and demand growth start to recover towards the end of the decade. It also foresees a number of challenges for future North American LNG projects due to difficulties in attaining supply agreements with customers in a bearish market.

The US Federal Energy Regulatory Commission’s (FERC) surprise decision to reject the application to construct the Jordan Cove LNG terminal and the Pacific Connector Gas Pipeline can be seen as evidence of the EIU’s fears. FERC referenced concerns that the project had failed to demonstrate sufficient commercial support; an issue that the LNG project’s backer, Veresen Inc., immediately attempted to redress by signing a preliminary agreement with JERA Co. Inc. to cover 25% of the terminal’s capacity.

In spite of these near term fears, the EIU is confident that the global demand for natural gas will eventually regain momentum and that the prospects for US LNG exporters look bright beyond 2020. As such, it is essential that project developers continue to look to the future, despite the challenging environment that they currently face. In this issue of LNG Industry, CH·IV International explains how a detailed implementation planning strategy can help US LNG project applicants efficiently transition from project development into execution (p. 18). In a market as unpredictable as ours, maintaining a clear and detailed plan is the key to keeping costs and schedule risks low.