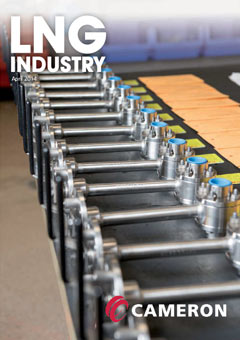 Well, a lot can change in a month! In the March issue of LNG Industry, I wrote on Russia’s decision to liberalise its LNG exports in a bid to meet growing demand from Asia Pacific markets.Now, following the political turmoil in Ukraine and Russia’s annexation of Crimea, focus has shifted to another of the country’s gas export markets: Europe. Although, at the time of writing, the gas continues to flow out of Russia, the situation is undoubtedly volatile. As the US and EU heap sanctions on Russia, its most obvious form of retaliation is to turn off its gas taps into Europe. This could result in a similar situation to that witnessed in January 2009, when a dispute over gas prices between Russia and Ukraine resulted in a two-week cessation of Russian supplies, which ultimately left a number of countries across South-Eastern Europe shivering in the winter cold.

Such fears have led to a clamour for the US to loosen the shackles on its shale gas exports. In recent weeks, lngindustry.com has been inundated with articles urging President Barack Obama to expedite approval of LNG exports to help the country’s vulnerable allies in Europe stand up to Russian aggression. A notable call for help was made from Central Europe directly. The ambassadors to Washington from Poland, Hungary, Slovakia and the Czech Republic sent joint letters to lawmakers in the Senate and House of Representatives asking for assistance.

Whether or not Obama is willing to make such a bold move ahead of midterm elections in November remains to be seen. There is also the obvious fact that the US can do little to help in the immediate future. Its first export terminal is not due to be completed until the second half of 2015 and the US will not produce the kind of volumes necessary to make an impact until the 2020s.

Furthermore, the US government cannot direct where LNG exports go. If the price for LNG in Asia is higher than it is in Europe, it is likely that is where the LNG will eventually end up.

Some also see it as far-fetched to suggest that Russia will cut off its gas supplies to the whole of Europe – its biggest customer. And even if it did, experts predict that most of Europe should have enough gas to last the next six months or so, following a mild winter that has resulted in half-full gas storage reservoirs.

However, the fact remains that Europe remains largely at the mercy of Russian whims. To reduce its vulnerability in the long-term, Europe must wean itself off Russia by diversifying its sources of imported gas. By speeding up LNG export approvals, the US can send a clear signal that it is prepared to utilise its energy assets to counter Russian influence across Europe. That is a good thing, even if significant exports will not be seen for some time.

You can also keep up to date with the latest developments in the Ukraine crisis, and its impact on the LNG industry, at www.lngindustry.com