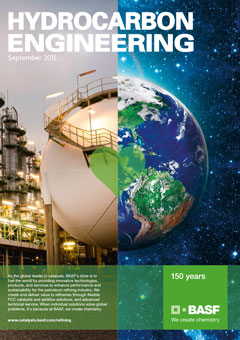 In the week before this issue of Hydrocarbon Engineering was sent to press, the news was rife with reactions to the US Environmental Protection Agency’s (EPA) latest round of ‘commonsense’ proposed standards for the reduction of emissions from greenhouse gases and volatile organic compounds from the oil and natural gas industry.

This time around, methane, the key component of natural gas, has come under fire, with the EPA backing President Obama’s Climate Action Plan to cut methane emissions from the oil and gas sector by 40 - 45% from 2012 levels by 2025. According to the EPA, the proposed standards for new and modified sources are expected to reduce methane emissions by 340 000 - 400 000 short t, the equivalent of reducing CO2 emissions by 7.7 - 9 million t, and yield net climate benefits of US$120 - 150 million in 2025.

During January 2015’s State of the Union Address, the President emphasised that “no challenge poses a greater threat to future generations than climate change,” and this has certainly been reflected in the US government’s efforts to ‘clean up’ the country. But while many government bodies and environmental organisations have applauded the EPA’s efforts, the proposed standards have, understandably, caused uproar in the oil and gas community.

"Since 2005, natural gas producers have cut methane emissions 38% while increasing production 35%. This impressive record has been accomplished through existing regulations and industry innovation. With further improvements certain to continue, we believe new and additional regulations are both unnecessary and counterproductive,” said Marty Durbin, President and CEO of America's Natural Gas Alliance (ANGA).

The latest news from the EPA follows concern from the industry regarding Obama’s recently announced Clean Power Plan, which aims to reduce CO2 emissions by 32% from 2005 levels by 2030. Chet Thompson, President of the AFPM, highlighted the association’s trepidation “that the rule exceeds EPA’s statutory authority, commandeers states primacy in making energy decisions, provides inadequate time for compliance, and fails to consider the current energy infrastructure, which ultimately will lead to higher electricity costs for consumers.”

One cannot avoid the issue of environment these days, and the oil and gas sector continues to face an uphill battle. However, the industry has made significant progress over the past couple of decades, adapting to new rules and regulations, making notable achievements in the areas of emissions reduction, energy efficiency and renewable power generation, and continuing to innovate with new and increasingly intelligent technologies. On that note, make sure to read the article from Linde Gases on page 89, which focuses on next generation fuels and why they demand a new take on environmental control.