A naming ceremony has been held for the new Sovcomflot (SCF) liquefied natural gas (LNG) carrier, Velikiy Novgorod, ordered for the transportation of LNG for Gazprom. The vessel will operate under a long-term time-charter agreement with OAO Sovcomflot, and will reinforce Gazprom’s position in the global LNG market, as well as strengthen the Russian LNG tanker fleet.

The ceremony at the shipyard was attended by Gazprom deputy chairman on the management committee, Alexander Medvedev, Gazprom Export deputy CEO, Elena Burmistrova, who is the sponsor of the vessel, SCF CEO, Sergey Frank, Novgorod administration representatives, as well as representatives from the international financing organisations, Lloyds Maritime Register and the Russian Maritime Register of Shipping.

The Velikiy Novgorod is the first vessel in a series of high-tech ice class LNG carriers that has been specially designed in accordance with Gazprom demands. The second ship of the series, Pskov, is due to be delivered in September 2014. This new series of LNG carriers will strengthen the Gazprom’s position in the global energy market.

LNG tankers
LNG tankers in the Velikiy Novgorod series are some of the best vessels in their class. The technical parameters of the vessels are:

The tri-fuel diesel-electric propulsion system has been specially adapted for operation in low temperature conditions. Vessels in the Velikiy Novgorod series are also capable of transporting gas on a year-round basis from almost all existing LNG terminals, including Russia’s first LNG terminal, Sakhalin-2, and the forthcoming Vladivostok-LNG terminal.

The gas tankers were developed in collaboration with experts from Gazprom, Sovcomflot, the Russian Maritime Register and the United Shipbuilding Company (OAO OSK). The design complies with the latest requirements regarding ecological norms, energy-efficiency, working conditions and leisure provision for crews, as well as onboard safety.

The type of cargo system (reinforced membrane structure) is suited to operations in challenging climatic conditions. This has been proven through trials carried out in collaboration with experts from the Russian Maritime Register of Shipping and Krylov State Research Centre.

Comments
Alexander Medvedev commented: “Gazprom gradually implements its strategy in the field of production and supplies of liquefied natural gas. Within this framework we form our own tanker fleet ready to provide the transportation of LNG to any point of the world, as well as along the Northern Sea Route. Tankers Velikiy Novgorod and Pskov allow Gazprom to increase the volume of trade seriously and reinforce its positions on the global LNG market”.

Sergey Frank commented: “The expansion of the LNG tanker fleet with the addition of modern, high ice class vessels from the Velikiy Novgorod series marks an important stage in the implementation of the OAO Sovcomflot development strategy, which provides for significant growth in the gas transportation segment subject to the development of new industrial projects in the Russian Arctic. SCF fleet currently has 11 gas carriers. A further three vessels, including sistership of Velikiy Novgorod - LNG carrier Pskov, will be delivered within 2014-2015. Counting these deliveries SCF will be certain leader among the LNG operators of ice class gas carriers.

“We are confident that this gas carrier and those to follow in the series will allow Gazprom to strengthen its positions on the global LNG production and supply markets.

“The name of the tanker was a common decision with Gazprom. Velikiy Novgorod is one of Russia’s oldest cities with a glorious history going back to the establishment of the Russian State and the start of merchant shipping between Russia and Europe.

“We are grateful to our partners for the trust they have placed in us and are pleased to offer them first-class, modern LNG transportation services – guaranteeing reliable, efficient and environmentally safe shipping.”

Read the article online at: https://www.lngindustry.com/lng-shipping/20012014/sovcomflot_orders_lng_tanker_59/ 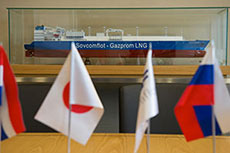 Sovcomflot has signed a 10-year loan with a consortium of international banks to fund two LNG carriers that operate under contracts with Gazprom. 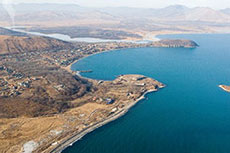 Gazprom executives have meet with the governor of the Primorye Territory to discuss large scale activities in the region. 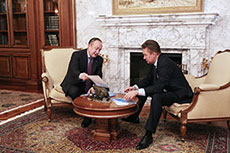 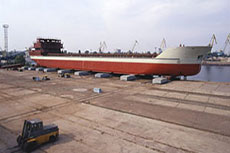 Rosneft, Gazprombank, Sovcomflot and DSME have signed a memorandum of understanding to establish shipbuilding in far east Russia.