BC Ferries continues to roll out its Clean Futures Plan with the launch of its fourth LNG-fuelled Salish Class vessel. 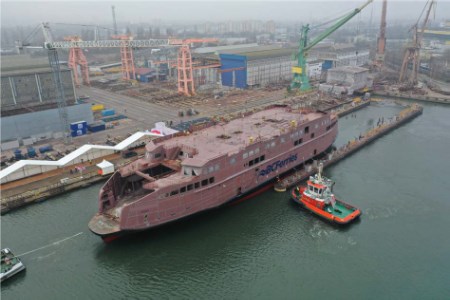 The ship entered the water over the weekend at Remontowa Shipbuilding S.A. in Gdansk, Poland, with work continuing there until scheduled sea trials in late 2021.

Following successful sea trials, the vessel will make the 10 440 nautical mile journey from Gdansk, Poland to British Columbia in early 2022 for final preparations. The vessel is scheduled to go into service in the Southern Gulf Islands in 2022, and is identical to the three Salish Class vessels built by Remontowa for BC Ferries in 2016 - 2017, which supports efficiency and interoperability.

BC Ferries issued a Request for Expressions of Interest (RFEOI) for the construction of the vessel to leading shipyards in Canada and around the world in July 2018. Canadian shipyards were invited to participate in the competitive bidding process. BC Ferries received responses from 16 international shipyards and short-listed three shipyards to proceed to the Request for Proposal (RFP) stage. No Canadian companies submitted a bid.

The 107 m Salish Class vessel will have the capacity to carry at least 138 vehicles and up to 600 passengers and crew, and is built as dual-fuel, capable of running on LNG or ultra-low sulfur diesel. Using primarily LNG to fuel the new ship will result in reduced emissions and reduced costs for BC Ferries. When the ship enters service, it will allow for the retirement of the Mayne Queen, a diesel-fuelled vessel.

BC Ferries’ Clean Futures Plan outlines the company’s path to replace diesel fuels with cleaner energy options. BC Ferries continually seeks energy sources that offer a cleaner, lower carbon-intensity option to displace non-renewable diesel. In the company’s move towards a sustainable future, adopting LNG is one way to reduce its impact on the environment today.

In partnership with the First Peoples’ Cultural Council, BC Ferries will commission an artist to create designs for the new Salish Class vessel.

Read the article online at: https://www.lngindustry.com/liquid-natural-gas/31122020/remontowa-launches-bc-ferries-fourth-salish-class-vessel/