On 17 August 2017, the Sovcomflot-owned icebreaking LNG carrier Christophe de Margerie successfully completed her first commercial voyage, transporting LNG through the Northern Sea Route (NSR) from Norway to South Korea. During this voyage, the vessel set a new time record for an NSR transit of just 6 days 12 hours and 15 minutes. Moreover, Christophe de Margerie has also become the world’s first merchant vessel to travel the full length of the NSR without any icebreaker escort. 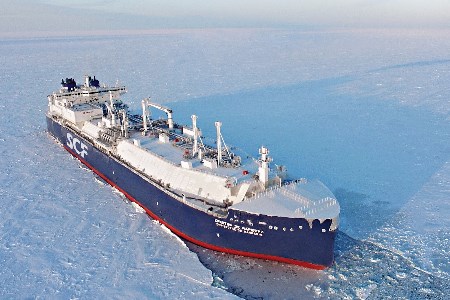 During her record-setting voyage, the LNG carrier covered 4060 km from Cape Zhelaniya of the Novaya Zemlya archipelago to Cape Dezhnev at Chukotka, Russia’s easternmost continental point.

The vessel again proved her ability to operate in harsh, high-latitude environments. Her average speed during the passage exceeded 14 knots, despite the fact that in some areas she had to sail through ice fields 1.2 m thick.

The total time of the voyage from Hammerfest in Norway to the port of Boryeong in South Korea was 19 days, about 30% faster than the regular southern route through the Suez Canal. This again demonstrates the economic potential of using the Northern Sea Route for large-capacity vessel transits.

Christophe de Margerie is the world’s first and currently the only icebreaking LNG carrier. This unique vessel has been built to order for SCF Group (Sovcomflot) to serve the Yamal LNG project and transport LNG year-round in the difficult ice conditions of the Kara Sea and Gulf of Ob. The vessel was delivered to Sovcomflot on 27 March 2017, following her successful ice trials in the Kara and Laptev Seas.

The LNG carrier is capable of sailing independently through ice of up to 2.1 m thick. She has been assigned an ice class Arc7, the highest ice class amongst existing merchant vessels. Meanwhile the power of her propulsion system is 45 MW, which is comparable to the capacity of a modern nuclear-powered icebreaker. Christophe de Margerie became the world’s first vessel with a high ice-class to have three Azipod units installed, providing the vessel with a high ice-breaking capability and significant manoeuvrability.

The LNG carrier is named after Christophe de Margerie, the former CEO of Total, who played a key role in developing the investment decisions behind, and a technological basis for, the Yamal LNG project. He also made a major contribution to the development of Russo-French economic relations in general.

Read the article online at: https://www.lngindustry.com/liquid-natural-gas/23082017/sovcomflots-unique-lng-carrier-sets-new-record/