Calor is set to play a vital role in the rise of LNG for the commercial vehicle market, as it announces an investment of £3.5 million to help deliver the supply infrastructure needed to secure LNG’s position as the fuel of the future in the UK. 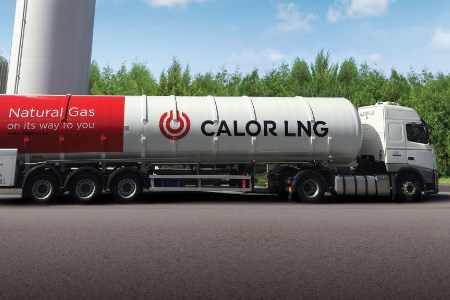 With an increasing proportion of the 120 000 heavy goods vehicles (HGVs) on UK roads predicted to be fuelled by gas over the coming years – in part due to growing concerns around air pollution from diesel engines – developing the correct supply infrastructure to meet this demand will be key to LNG’s success. As an increasing number of leading truck manufacturers prepare to bring dedicated LNG vehicles to the market, Calor’s investment in LNG’s refuelling and supply network will help ensure the fuel offers a cost-effective solution to customers, improving its accessibility while assuring security of supply too.

A key aspect of Calor’s investment in LNG’s supply infrastructure is its refuelling network, which is the largest publically-accessible one in the UK. The company currently operates seven sites in total across the country, covering Lockerbie, Castleford in West Yorkshire, Lymm in Warrington, Grantham, Donnington, Wolverhampton and Bristol, with plans for developing more LNG refuelling stations already in the pipeline.

This offering is supported by Calor’s ever-growing supply network of LNG. The fuel is currently supplied in the UK from the Isle of Grain import terminal. Calor is also instrumental in the development of new LNG terminals across the UK, as a key partner of the CaledoniaLNG project. Under a Memorandum of Understanding, Calor and other partners have agreed to increase the supply and availability of LNG in the North of England, Scotland and North Sea regions.

Mark Gilks, Transport Sector Specialist at Calor, explains: “LNG represents a series of opportunities for those operating in the commercial vehicle market, with an increasing number of leading truck manufacturers set to switch from diesel.

“With approximately 120 000 HGVs on UK roads, this market is responsible for around 27 per cent of roadside NOx  and has a key role to play in reducing air pollution. This is supported by research from Public Health England, the Royal College of Physicians  and Policy Exchange, with a report from the latter citing the wider use of gas-based fuels as one of the few viable options available to rapidly improve air quality.

“Adopting LNG would make a dramatic difference, reducing NOx by up to 70 per cent and particulate matter by 90 per cent when compared with the cleanest Euro 6 diesel engines. Calculations have shown that if 48 000 HGVs were to be fuelled by LNG instead of diesel, this could cut carbon emissions by more than a million tonnes.

“Calor is playing a key role in helping to secure this future by investing in the fuel’s supply infrastructure, providing the largest refuelling network in the country while having access to LNG’s ever-growing supply network.”

One supplier of LNG-dedicated HGVs, Iveco, agrees. Product Director Martin Flach adds: “Since the mid-1990s, commercial vehicles powered by natural gas have been available. From an initial focus on municipal applications, through urban and regional distribution, the range of gas vehicles has now reached long haul motorway applications. LNG has been a key factor in achieving long distance operations.

“LNG trucks are now in operation right across Europe and the network developments from Calor will aid the adoption of this technology to a wider customer base. Predictions are that natural gas-powered vehicles could reach 20 per cent of HGVs sold by the early 2020s, which is an extremely exciting prospect.”

Read the article online at: https://www.lngindustry.com/liquid-natural-gas/13112017/calor-announces-significant-investment-in-lng-supply-infrastructure/