Weak economic outlook fuelled by the COVID-19 pandemic has led to a fall in oil and gas prices and weakening LNG demand, prompting LNG exporters to revisit their strategies and CAPEX plans for 2020, says GlobalData. 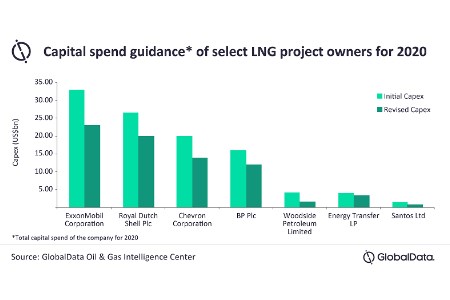 LNG companies have been forced to look for short-term contracts as securing long-term supply contracts have become a challenge. This has, in turn, impacted project financing and resulted in financial investment delays (FIDs) of several projects. Moreover, the skepticism around the current economic scenario is causing LNG companies to think twice before making investment decisions.

Haseeb Ahmed, Oil and Gas Analyst at GlobalData, comments: “One of the go-to strategies for LNG operators has been downsizing overall CAPEX for 2020. ExxonMobil, Royal Dutch Shell Plc, and Chevron Corporation have all taken off around a third of their initially planned expenditure for this year.”

According to GlobalData, Woodside’s decision to downsize its CAPEX spending for 2020 has led to the delay in FID of Pluto LNG Train 2 project in Australia. The FID of Energy Transfer LP’s Lake Charles project has been delayed until 2021. The investment delays may not only hamper the progress of projects, but they could also extend the time taken for companies to break-even.

Ahmed adds: “The LNG sector has undergone significant losses in a short span due to the pandemic, which has threatened the existence of several small to mid-scale LNG companies. Measures such as reducing capex or delaying FIDs could only be short-term solutions. To be able to sustain in the long run, LNG companies need to work on strategies to tackle any future challenge. Increasing supply chain efficiency and investing in technologies such as internet of things (IoT) and data analytics are some strategies that these companies can rely on – apart from leveraging on increasing demand from Asian countries such as China and India.”

Read the article online at: https://www.lngindustry.com/liquid-natural-gas/09112020/reduced-lng-demand-delays-fids/