The Panama Canal set a new monthly record for transits and tonnage of LNG vessels in January, as a result of the recent surge in the energy market. 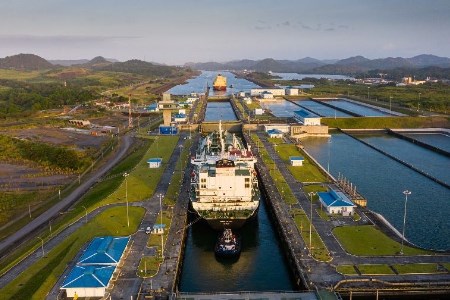 In January, a total of 58 LNG vessels transited through the Neopanamax Locks, totalling 6.74 million Panama Canal tons (PC/UMS). The previous monthly records were set in January 2020 with 54 transits and in November 2020 with 6.23 million PC/UMS.

“These achievements reaffirm the Canal’s ability to adapt and guarantee our competitiveness and reliability to capture the opportunities presented by market changes, including the LNG segment,” said Panama Canal Administrator, Ricaurte Vásquez Morales. “For more than a century, the Panama Canal has demonstrated its responsiveness to global trade changes, and what the world has experienced in the past year will not be the exception.”

The Panama Canal implemented recent adjustments in its processes to provide greater flexibility in its operations and respond more efficiently to the continuous changes in the demands of maritime trade, reflected in the current vessel mix that use the waterway.

In January, the Panama Canal announced modifications to the Transit Reservation Booking System, allowing any slot that becomes available for Neopanamax vessels within 96 hours prior to transit to be offered through an auction process.

Since the modifications, the Canal has conducted 25 auctions, of which nine have been awarded to LNG vessels. In addition, the Canal was able to transit three northbound LNG vessels in one day, on 25 January, and the transit of four LNG ships, two northbound and two southbound, in one day on 31 January. This has allowed the Canal to maximise the efficiency and flexibility of the transit service to better handle the current demand.

The increase of LNG transits through the Panama Canal is a result of record winter temperatures in Asia, which have caused LNG prices to rise to unprecedented levels.

Read the article online at: https://www.lngindustry.com/liquid-natural-gas/05022021/panama-canal-sets-lng-transit-and-tonnage-record/