Keppel Shipyard Ltd (Keppel Shipyard) and its topside partners are currently negotiating conversion and liquefaction contracts with Golar LNG on the conversion of an existing LNG carrier into a floating liquefaction and storage vessel (FLSV). The terms and conditions of the contracts, including the contract value and expected completion timeline, have yet to be finalised.

The negotiations on the contracts commenced following the conclusion of a front-end engineering and design (FEED) study conducted at the end of August by Keppel Shipyard to confirm the engineering and work scope. The study confirmed that the conversion will take approximately 30 months from financial commitment to complete.

Upon completion of the FEED study, Keppel Shipyard has announced that they would proceed to work with Golar LNG on the conversion and engineering of the first of three FLNG vessels. There will be an option to convert the other two FLNG vessels at a later date.

Read the article online at: https://www.lngindustry.com/liquid-natural-gas/02122013/keppel_and_golar_discuss_contracts_for_lng_carrier_conversion__into_flsv/ 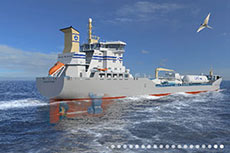 The company’s newly built tri fuel carrier has been committed to a contract to an oil and gas major.