Cameron LNG has initiated the pre-filing review with the Federal Energy Regulatory Commission (FERC) for the planned expansion of its existing three train liquefaction project in Hackberry, Louisiana, US.

The expansion project is expected to include two additional liquefaction trains (trains No. 4 and No. 5) and one additional full containment LNG storage tank (tank No. 5). The expansion will be capable of increasing LNG production capacity by 9.97 million tpy. If approved, Cameron LNG's export capacity will be 24.92 million tpy.

Cameron LNG has filed a permit application with the US Department of Energy (DOE) for authorisation to export the LNG produced from the proposed expansion project to all current and future Free Trade Agreement (FTA) countries. Cameron LNG also expects to submit an application to the DOE for authorisation to all current and future non-FTA countries.

The expansion project will be located on land within the existing Cameron LNG terminal site. It is expected to utilise a similar liquefaction train design and will include a full containment LNG tank consistent with the existing tanks.

Farhad Ahrabi, CEO of Cameron LNG, said: "The expansion project will allow Cameron LNG to export additional LNG from low-cost, reliable US LNG supplies to international markets […] Locally, our economy will continue to reap the benefits in the form of new full-time jobs that will be created in support of the terminal operations.”

Read the article online at: https://www.lngindustry.com/liquefaction/25022015/cameron-lng-applies-for-expansion-approval-312/

The final US trade report for 2014 demonstrates the power of US oil and natural gas production to drive economic gains. 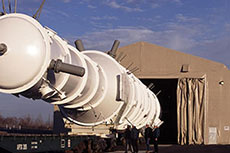 Air Products will provide its LNG technology, equipment and process license for production trains at the Cameron LNG Project.

American oil and LNG exports are revitalising the economy and shifting the global power balance, according to the API.

The DOE has granted the Cameron LNG project conditional approval to export to non-FTA countries.