John Godbold, Chief Operating Officer and Project Director of Bear Head LNG Corp. has confirmed that the company has filed an application with Canada’s National Energy Board (NEB) for an export licence for up to 12 million tpa of LNG.

The application also seeks a licence to import up to 503 billion ft3/year of natural gas from the US.

Bear Head LNG is seeking licences to export LNG from Nova Scotia for a 25-year term. Under the NEB filing, exports would be authoriSed at 8 illion tpa beginning in 2019, increasing to 12 million tpa in 2024, depending on market and supply conditions.

Potential options for natural gas supply to the facility come from both the US and Canada.

The decision to expand the initial capacity of the LNG facility was attributed to market response and gas supply projections.

Ian Salmon, Chief Financial Officer and Chief Commercial Officer, said the decision to expand the initial capacity of the facility was based on market response and gas supply projections.

Bear Head LNG retained Roland Priddle, former Chair of the NEB, to assess if the project’s proposed export volumes are surplus to reasonably foreseeable Canadian requirements. Mr Priddle’s report notes that the NEB’s “confidence in Canadian and North American gas resource has been well placed, continental production has expanded dramatically and Canadians have continued to be able to meet their gas requirements in an entirely satisfactory manner at prevailing market prices.” Priddle also suggests that the Nova Scotia and Maritimes natural gas market could benefit from projects anchoring large-volume incremental supplies of natural gas. “In this connection, the Bear Head LNG project, because of its major gas requirements, could be the catalyst for a more effective Maritimes gas market functioning.”

A separate study conducted by Ziff Energy for Bear Head LNG concludes export proposed by the company “will not cause Canadians any difficulty in meeting their natural gas requirements at fair market prices during the forecast period.”  The Ziff Energy report also stated that that “Canada and the US have productive natural gas potential resources in excess of projected demand during the forecast period.”

Read the article online at: https://www.lngindustry.com/liquefaction/07112014/bear-head-lng-files-export-application-1751/

LNG Ltd has announced that the Bear Head LNG project has raised its initial facility production capacity to 8 million tpa.

LNG Limited has finalised the acquisition of 100% of Bear Head LNG Corporation (BHLC). 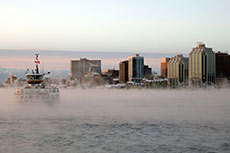 Nova Scotia has congratulated LNG Limited on its proposal to develop an LNG export facility at Bear Head.

The capital raising will be used to fund the acquisition of Bear Head LNG Corp., as well as fund the LNG export project.