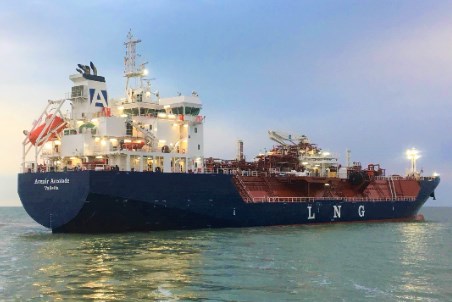 On delivery, the Avenir Accolade will enter a three-year bareboat charter to LNG Power Limited, a subsidiary of Hygo Energy Transition Ltd to support Hygo’s developments in Brazil.

Accolade’s positioning marks Avenir’s first entry into the Latin American LNG market. Delivering LNG to Hygo’s customers along the Brazilian coastline and fitted with specialised LNG handling equipment, she will be capable of unloading LNG directly into trucks for onward distribution across Brazil.

Peter Mackey, CEO Avenir LNG Limited, stated: “The delivery of the Avenir Accolade is another important milestone in delivering our strategy of building Avenir LNG into the world’s leading small scale LNG supply company, enabled by a market-leading set of assets. 2021 is a transformational year for Avenir LNG as we commission our on-shore LNG terminal in Sardinia in the coming weeks and continue to expand our fleet with the addition of four more new-build vessels by year end.”

Read the article online at: https://www.lngindustry.com/liquid-natural-gas/10032021/avenir-lng-receives-lng-supply-and-bunkering-vessel-delivery/